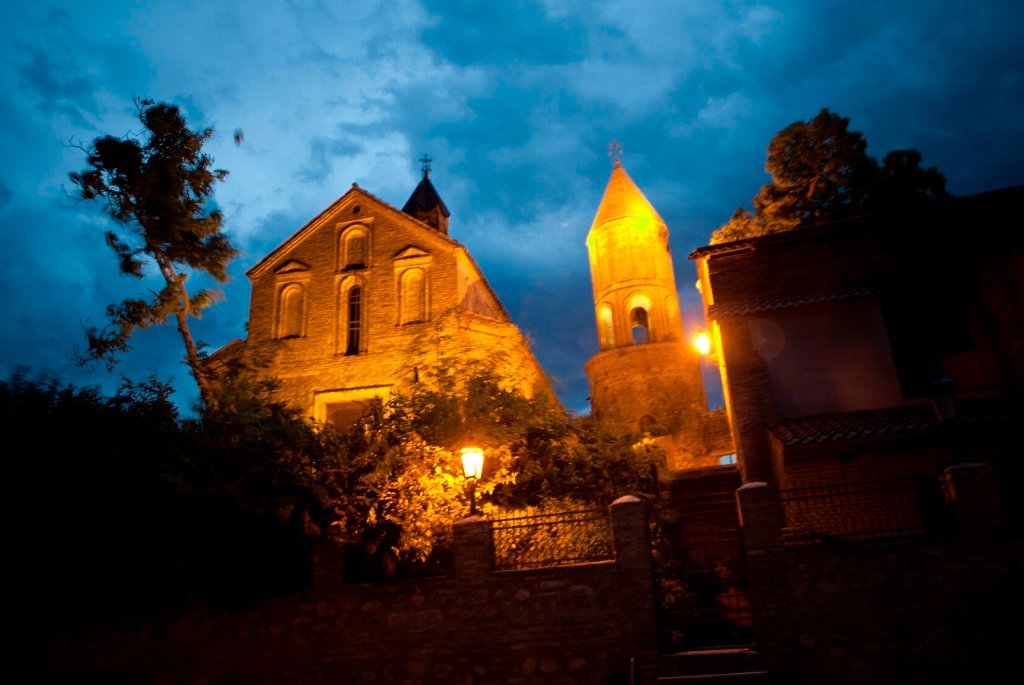 People of Kvareli did not wish to become Christians and fled to Tusheti, though later still were baptized.

While preaching in Kakheti St Nino got ill with an incurable disease, contemporary term for the disease is malaria. St Nino died in approximately 3321 – at the age of 31, in Kakheti, Bodbe settlement.

There is an opinion that the saint died in Sagarejo, Ninotsminda village, though the historical name of the place of her decease is Kukheti, Bodisi settlement.

King Mirian wished to take the remains to Mtskheta, but 200 people were not able to even move her, so she was buried in Bodi settlement, same Bodbe.

Upon the death of St Nino King Mirian constructed the first church, which was a large and luxurious building. It was this church and the grave of the saint that King Mirian donated half of his royal treasure.

In XIX old gravestone of St Nino’s grave was replaced by marble stone by iconographer Mikheil Sabinin. During communist rule the monastery was transformed into a hospital. Along with many others, there was an x-ray room where they used the icon of the Holy Mother of God as a table surface. Despite numerous visions calling for returning the icon to its place, they continued perceiving it as just an ordinary painting. When one of the atheists cut the face of the icon with a knife, the person died unexpectedly despite being absolutely healthy.

Monastic life revived in 1991 in St Nino’s Convent in Bodbe.

St Nino’s Miraculous Stream
The main miracle of Saint Nino's Nunnery is St Nino’s stream, which emerged as a result of St. Nino’s prayers. There are two streams in the monastery, one of which is St Nino’s stream having the power of consecrated water.

Near the stream the church named after St. Nino’s Parents – St Zabulon and Sosana is built.

Many believers are healed upon washing in the stream.
Until 2000 until a construction was built, there used to be an iron trough here. Later a small
pool was built.

Beautiful staircase goes down to the holy stream from Bodbe Convent with dwellings of the nuns on both sides of it.

The stairs seem so long as if the God is testing you whether you are strong enough to get there. The always is a nun sitting at the entrance to the stream. She instructs people on how to behave there.

In front of the entrance arch there is a special place where people are obliged to leave their footwear and enter barefoot only.

A special robe can be bought which is put on the naked body of the believer. Once bought and used the robe may be handed over to disabled and sick people lying in bed as it has miraculous healing power. There have been cases of crosses depicting on the robe being dried. Also there is a special place inside the pool where robes which are not for sale are placed and have to be returned after use. There is also a special dressing room allocated where people can leave their clothes and put on their robes. Though there are a lot of people, the construction is small no more than 4-5 persons can enter at a time. Men and women can enter separately. Small children can be taken by women or men depending on the gender of the child.
Stairs go down the holy water from both sides of the pool – one for entering and the other for withdrawing. Middle part of the pool is relatively deep and can reach the shoulders of the person with medium height.

It is advisable to plunge the whole body into the water and say prayers. It is not necessary to know a certain prayer; each word coming from the heart approximates every believer to the God.
In the middle of the pool there is a special tube supplying holy water for wash the face. Though the water is very cold, there have not been even mild cases of colds. The visitors have huge faith. In addition, though lots of the visitors have various diseases, there has not been a single case of transmitting the disease. Water and coldness disappear as soon as one gets dressed.

There are lots of foreigners arriving to plunge into the water who had witnessed miracles. Having come out the people have the chance to take the stream water home. Though the flow is weak and even intermittent, the water is always cold, even in summer, and pleasant to drink. Those who have no vessels to take the water home can buy them in the church kiosk.

The way back to the Bodbe Monastery lies on the same stairs enabling the believers to realize the sanctity they have been able to share.